Door County is home to eleven lighthouses.  They are spread out over 300 miles if shoreline, from Sturgeon Bay, north and on the surrounding islands.

These landmarks are from the 19th and early 20th centuries, however many are still functioning.  Some welcome visitors on a daily basis, but other only open to the public during the Annual Lighthouse Festival.

This year, the Lighthouse Festival is June 8th, 9th and 10th.  This festival consists of boat a

nd land tours of all eleven lighthouses.  Participating in this, access is gained into three lighthouses that normally aren’t open to the public.  Those include Chambers Island, Plum Island and Sherwood Point Lighthouses.

Potawatomie Lighthouse is located on Rock Island.  This lighthouse was the first lighthouse in Wisconsin.  Guided tours are held here daily.

Plum Island Range Lights are located on Plum Island, which is between Washington Island and the mainland peninsula.  Boat tours are this lighthouse are available and open to the public during the Lighthouse Festival.

Pilot Island Lighthouse is now located on Pilot Island.  Originally, it was located on Plum Island, but was removed due to its location being too far west.  Since this is on Coast Guard property only guided boat tours around the lighthouse are permitted.

Chambers Island Lighthouse is located on Chambers Island on the Bay of Green Bay, between Fish Creek and Ephraim.  This lighthouse does allow visitors to tour the inside, however, no transportation to the island is provided.

Eagle Bluff Lighthouse is located in Peninsula State Park and is open to the public for daily guided tours.

Cana Island Lighthouse is located on Cana Island in Baileys Harbor.  There is a unique causeways that connects the island to the mainland.  Current weather conditions affects the causeways greatly.  If you plan to walk the causeway, which is the only way to the island, wear boots or other appropriate footwear to withstand the rocks and water.  Once on the island, tours and tower climbers are permitted.

Baileys Harbor Range Lights were part of the upper and lower lights.  This two part system indicated safe waters when both lights were on.  These two lights were eventually removed and replaced with a directional light.  In 2012, the lower range light was fully restored.  In 2015, the lights were relit.  It is planned that the upper range light will be restored too.

Old Baileys Harbor Lighthouse is located on a small island off the shores of Baileys Harbor.  As of 1983, it is no longer in service, but it still stands.  It is now privately owned, but there are some guided kayak tours that pass by this landmark.

Sherwood Point Lighthouse was the last lighthouse to be manned on the Great Lakes.  It is located West of Sturgeon Bay.  This property belongs to the Coast Guard and is home for active U.S. Military members.  The only time the public is allowed on this property is during the Lighthouse Festival.

Sturgeon Bay Canal Station Lighthouse is also on Coast Guard property.  It is located at the mouth of the shipping canal.  When visiting, be sure to stay to the left of the walkway leading past this lighthouse to the North Breakwater Pier.  This lighthouse is open to the public during the annual  festival as well.

Now that you have been briefed on the lighthouses in Door County, doesn’t that make you want to check them all out for yourself?

Tickets are required for the Lighthouse Festival and can be purchased online at www.dcmm.org.

Don’t forget to book your room today as we are filling up quick for that weekend! 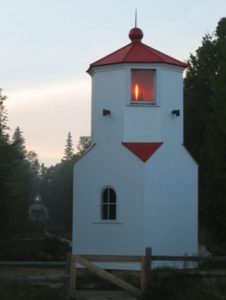 Set among the trees, this relaxed family-run motel along Highway 42 north of Ephraim is a 9-minute walk from the Northern Sky Theater. Warm rooms offer complimentary WIFI, flat-screen TVs and microwaves, along with minifridges and coffeemakers. Amenities includes car and RV parking and a daily continental breakfast served in the fireplace lounge. There’s also a seasonal heated outdoor pool and a furnished deck, as well as gardens featuring a playground, lawn games, picnic area, BBQ grills and a fire pit.